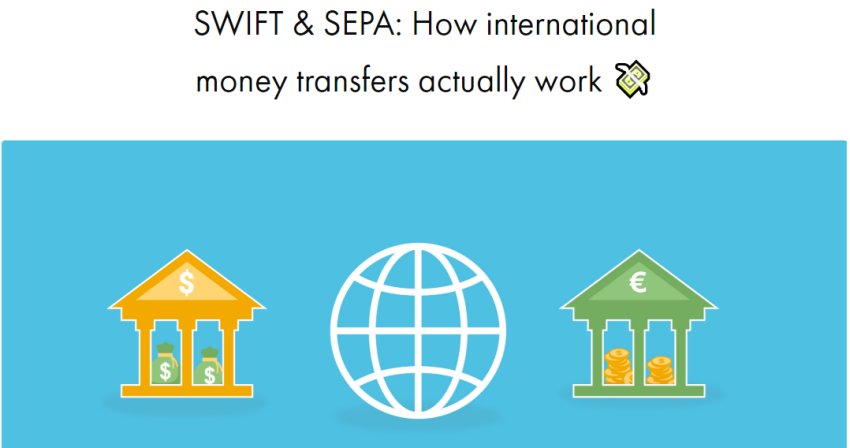 Back in the ‘80s, the quickest way to send money from London to New York was to physically take cash with you on a plane, just like in the movies. Surprisingly, this still holds true today, but have you ever wondered why? 🛩️

Last week we explained how money transfers work between two accounts held with the same bank (intra-bank transfers), as well as transfers between two different banks (inter-bank transfers). In case you missed that post, we recommend going back and reading it before you move on - it will help you understand the world of SWIFT and SEPA transfers.

International money transfers are basically inter-bank transfers, only in this case, the two banks happen to be in different countries, which makes things slightly more complex. The principle of correspondent banking still applies, which means that the two banks need to have an established relationship in order to facilitate the transfer.

The two most common ways to transfer money internationally are known as a SWIFT and a SEPA transfer.

What is a SWIFT transfer? 🌐

The Society of Worldwide Interbank Financial Telecommunication or SWIFT is a financial messaging system that runs on a network of tens of thousands of financial institutions from around the world.

The SWIFT system enables these institutions to securely send and receive information on financial transactions in a standardized way. This ultimately allows money to be sent from one bank to another, virtually anywhere in the world and in many different currencies.

But this system is far from perfect. SWIFT does not actually send money, it simply sends messages between the banks. Because of this, other systems that require more human intervention must be used to transfer the actual funds and this, in turn, makes SWIFT transfers slow. What’s more, the complex nature of these transfers usually incur a fee which nearly always gets passed on to consumers.

How does a SWIFT transfer work? 🤔

Let’s assume John wants to send £20 from his bank account in the UK to Alice’s account held with a bank in Singapore. Depending on the bank’s relationship, there are two ways in which this transfer can take place:

Banks have a direct relationship ❤️

If both banks have a direct relationship with each other, or in other words, if Bank 1 has a commercial account with Bank 2 and viceversa, the transaction would look like this:

John’s bank (Barclays UK) will send a SWIFT message to Alice’s bank (Lloyds Singapore), informing them of the transfer. Once the message is received (usually within minutes), the funds can be transferred directly between the two banks:

Since the banks have a direct relationship, they are able to easily moves the funds across, which keeps fees to a minimum and makes the transfer happen quickly.

Banks have no direct relationship 💔

If the banks don’t have a direct relationship, one or more intermediary banks must be found to facilitate the transfer.

So, John’s bank (Bank 1) will once again send a SWIFT message to Alice’s bank (Bank 2), informing them of the incoming transfer. But since neither banks hold accounts with one another, SWIFT will find an intermediary where both banks have commercial accounts - let’s call it Bank X. Once the intermediary is found, the funds can be processed at the end of the day (or based on some other predetermined schedule):

Since there were more operations happening behind the scenes, this transfer is more expensive (notice the hypothetical £0.40 fee) and takes longer to complete (usually between 3 to 5 working days). In this case, there was only one intermediary bank (Bank X), but some transfers can require two or more intermediaries, which introduces even more fees and delays. 🤨

But what if the transfer was from one currency to another? 💱 One of the banks would have made the currency exchange, usually at a less than desirable rate, adding to the total cost of the transfer. Adding all the different fees and marked up exchange rates reveals that SWIFT transfers can cost around £30 to £50, simply for moving your money from A to B! 😮

SEPA stands for the Single Euro Payments Area and represents a new format for international bank transfers within Europe. The SEPA zone comprises 34 countries, including 28 EU member states alongside Iceland, Monaco, Switzerland, Liechtenstein, Norway and San Marino. It was created to simplify cross-border money transfers in Euros, the only currency SEPA supports. 💶

In many ways, a SEPA transfer is similar to a domestic transfer. In essence, banks that support SEPA transfers either have direct relationships established or a network of intermediary banks, thus allowing transfers to run across country borders.

Let’s revisit our previous example and assume that John is sending Alice €20, and that both banks are part of SEPA. If the two banks have commercial accounts held with one another, then the flow of money is the same as our first example in this post:

If they do not have an established relationship, the transfer will pass through a central bank account in Europe, let's just call it the European Central Bank for the sake of our example. In a very simplified way, this is how the money would flow:

There is actually more that goes on behind the scenes, but for the purpose of this article, we won’t go into more details.

More important than how it works, is what SEPA transfers have to offer: